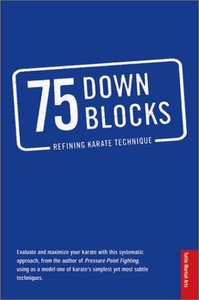 Every style of karate, tae kwon do, kung fu, or other martial art includes the down block as part of its kata, or forms. The forms are similar enough that martial artists will recognize them as down blocks, even though the specific block looks different from their own style. Taken together, these blocks make up a "universe of hundreds" of different variations on the basic block
75 Down Blocks explores this universe to look for the underlying principles common to all down blocks. AuthorRick Clark examines seventy-five different possible variations on the basic down block - with examples on how to use the down block to defend against twelve kinds of attacks- from wrist grabs and punches to kicks and attacks with a stick.