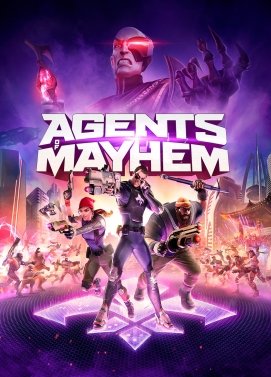 MoneoGold information about the seller and his items
offlineAsk a question

We are official dealers of 1C-SoftKlab, Novy Disk and Buka companies, our status is documented by the plati.market administration, as indicated by the icon next to the small operator (in the description above). All keys are acquired by legal means!

Here you can make a key purchase of this game. After the first purchase, you will receive a discount on all subsequent purchases of our products.

Immediately after payment by e-mail specified at purchase, you will receive a link where you will be able to access the license activation key for the game.
▀ ▀ ▀ ▀ ▀ ▀ ▀ ▀ ▀
Description:
Agents of Mayhem is a single-player action from the developers of the Saints Row series, in which players have to protect their world from evil.

The story of the game originates in Seoul, which after the horrors of Devilish Night lies in ruins left by the victorious procession of the gloomy LEGION - the organization of supervillains. People more than ever need heroes, and it was during this difficult time that the Chaos Agents appeared - a gang of selected and unbalanced outcasts armed with a wide variety of crazy weapons. It is for them that players have to fight to protect the world from evil. Handsome Hollywood is a famous TV star.

Cracker is a fun big guy with a huge cannon. Fortune is an air pirate wanted all over the world. Sweet Chamomile easily manages a six-barrel machine gun, whips beer and swears dirty. The frame is an immunologist shooting energy arrows from a futuristic bow. Penalty - a crazy football fan with a character who can literally disperse any crowd. They work under the close supervision of Persephone Brimstone, one of the ex-LEGION commanders, and her friday aide. Their common goal is the destruction of LEGION and its mysterious leader Morningstar.

Performing missions, agents move around the city in a variety of ways: they climb the walls of skyscrapers, run around construction sites, use their teleportation capabilities, and of course drive luxury cars equipped with combat systems and artificial intelligence created by the ingenious Quatermail.