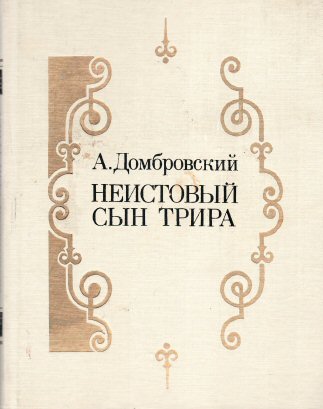 Bookinistica information about the seller and his items
offlineAsk a question

Roman writer AI Dombrowski is dedicated to Karl Marx and his comrades in the struggle, the emergence of Marxist revolutionary theory and philosophy. Recreate in the artwork lives of people, events, convey the "flavor of the time", which is separated from the readers of the century - a very difficult task. Clothed in flesh and blood life of such geniuses as Marx and Engels - doubly difficult. Author of the novel brilliantly coped with this.

File format Word. Excerpt: "... Those who had never been to Paris, who came here for the first time, it is hard sometimes to do things immediately, even if they are not urgent. Paris is calling on the street, is fascinating. And if the same in Paris autumn, beautiful autumn, when the Parisians are especially gentle love their city, and the city seems to like the Parisians, the business mood evaporates like the morning twilight to sunrise, and you always want to see and listen to Paris a beautiful city, lying on the green banks of the Seine and the picturesque islands. City of great historical upheavals and even greater expectations ... "Download Anatoly Dombrowski. Furious son of Trier.

Armored Warfare: Armata Project A Gift from MY. GAMES