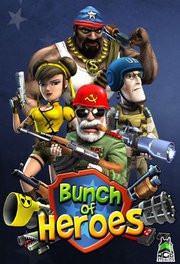 After payment you will immediately receive a key to activate the game Bunch Of Heroes in the Steam and the inclusion of all network functions of the game.

In addition, we are launching a campaign for our loyal customers. For every 5 purchase of any goods made by the sellerMediaSoft, since 1 December 2011 the buyer gets to choose one of the games from the STEAM company "New Disc" and "1C": RaceOn, Lost Planet Extreme Condition, Prey, Scourge Project, Shatter. Cooperate, buy your friends and get your prize !!! The main condition - for all purchases you have to post reviews.

For any questions related to the holding of shares, please contact the seller. The shares are not participating resellers with a personalized discount of 5% or more. The number of keys is limited, the seller reserves the right at the end of promotional key to stop the action.

Key Bunch Of Heroes has no regional restrictions - REGION FREE, and can be activated in any country. Language games - English !!!

The war can be fun if it is not treated so seriously! The game "Bunch of Heroes" - a vivid example. Brave soldiers converged on the battlefield, to see whose army stronger. All locations are in a colorful cartoon style and brave warriors resemble toy soldiers from a distant childhood. Now this army gets on your command, and you decide how to make better use of their troops. A few classes in the game: brave stormtroopers cheerfully fleeing the attack.

Backs guys cover the sniper and doctors running the midst of battle, that revive or heal a wounded soldier. Blood is present, but it is not perceived as serious. Names weapons just cause laughter: exploding cigars, jumping mines - this is only part of a broader arsenal. As you progress through the game you will be available a killer toy for the massacre of the enemy. Without multiplayer Bunch Of Heroes has not done: now the best of friends or just strangers can find out their relationship by playing online battles. And who is the best general - tells statistics that describe in detail your accomplishments and failures at the end of the match!

ATTENTION !!! Seller will never be to ask you to send a purchased key for confirmation, identification, receipt of gifts, etc. If you receive this letter, know that it is working crooks. Be very careful not to fall for such tricks !!!

Instructions on how to activate the key Bunch Of Heroes:

VNMANIE After activation serial key in the steam, the key becomes not valid, ie, they can not re-use.
Be sure to remember, and better write down all the details of your account! Without them, you will not be able to gain access to active games in the future.

Dear customer, in order to avoid lock key and your accounts are purchased KEYS bought from an official supplier.
BEWARE OF CHEAP suspicious code as They can be purchased BY ILLEGAL AND CAUSE bananas.

We take full responsibility for the products sold by us and give 100% guarantee of purity of the code and that the code has not been previously activated somewhere.