Campeon 2012 strategy on the principles of the winner A 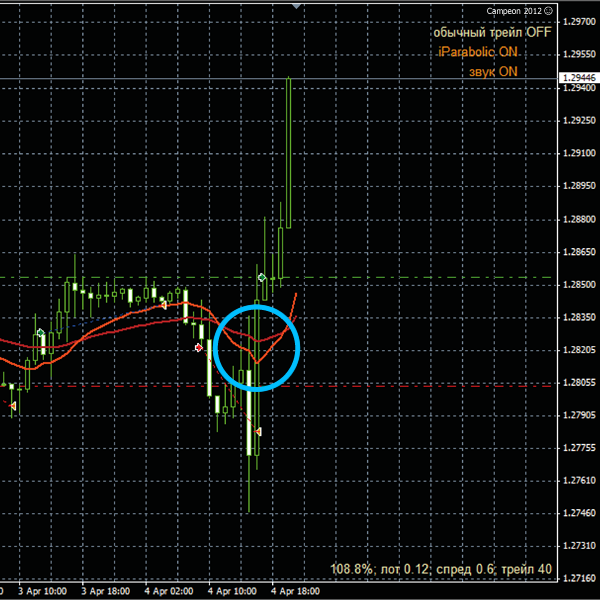 Campeon 2012 Advisor for Forex trading using MetaTrader 4. Campeon 2012 is able to automate their trading on the principles of one of the winners of the Championship advisors 2012


Advisor uses in trading moving averages to determine the different stages of a trend: the formation, development and completion of a trend. Quick spurt, due to which one of the advisers participating ATS 2012 "ran away" ahead of the competition, due to the possibility to work as a strategy to trend and counter-trend (on the rebound or reversal).


What is the moving average? It smoothed price movement, without unnecessary noise and "swings." In 2012 EA Campeon used exponentially weighted moving average, t. E. The front-reaching implications prices have more weight in determining the direction, than earlier. Therefore, any new and even more unexpected breakthrough price is taken into account immediately by the system. With the method parameter you can set any other method of smoothing.


The rules for determining the moment of entry into the market following. To purchase price must cross both moving averages (one fast and a second slower) from the bottom up for sale - from the top down. At the same time there are additional restrictions which may radically different operating principle advisor Campeon 2012 from other similar systems. For example, for fast opening purchase Mashka be slow below. That is, the graph formed downward movement, however, the price pierces both mashki candle from the bottom up, thereby indicating a new movement. The analysis of the strategy, which has become one of the winners of the 2012 ATS, it is clear that the simple principle of the moving average is fraught with incredible potential effective speculation.


During middle and high volatility recommended hour timeframe and older. The default settings are well suited for three pairs: EURUSD, GBPUSD and USDCHF. If the need arises in other settings, they can always ask the development team or the community of traders in the subject site where http://mt4.numerika.ru/experts/41/trendovaya-strategiya-na-osnove-odnogo-iz-pobediteley-chempionata-sovetnikov-2012-g.html organized a lively discussion of this strategy Forex. If volatility is reduced, and the market goes sideways, the timeframe may be reduced to 30 or 15 minutes.


Practice shows that the hourly chart appropriate to take into account the consistent price crossing moving averages. That is the adviser Campeon 2012 takes into account not only the breaking of a single candle, but two consecutive breakout candles, or even three, if the second "stuck" between Mashkov. If the breakout occurs in one candle, candle next must go in the direction of opening of the transaction by 10 points. Thus, developed and verified the opening mechanism of transactions that distinguishes this strategy from other similar strategies based on Masek.


Advisor Campeon 2012 trade as a way to automate a trend and counter-trend (rebound or reversal). For more effective work we recommend to combine the two modes of the trail realized in the EA, - the usual trail indicating the size of the trail by 1 point, and based on the Parabolic indicator. If the market goes sideways, often contradictory intersection Masek convenient "prune" faster than usual trail (5-20 points). When formed long duration fluctuations, more appropriate to use a trail through Parabolica.


Advisor puts the target values \u200b\u200bTakeProfit and StopLoss in two stages, that is able to work in any system of execution of transactions. It is able to identify simple and advanced digit prices. It allows to set the value of the lot in the form of a fixed value or as a percentage of the available resources. Both trail and sound alerts are included directly in the chart with a convenient dedicated buttons.

Future versions might advisor complexity of algorithms. Stay tuned for the link. For example, it is known that in the strategy, taken as a basis, the market opened at the turn of the deal with the lot, canceling the first deal. This tactic worked well in the 5th version of MetaTrader. In this version, the adviser Campeon 2012 this function has not yet entered into the algorithm. Everything depends on the views of the community of traders that the strategy will add to your arsenal.


The buyer gets a ZIP-archive with EX4-copy advisor instructions file (opens in OpenOffice, Word or Notepad extended). Demo account operates without binding. To work on a real account to be bound (no more than one real account for six months).


Forex Trading sopryazhana the risk of large financial losses. Advisor is a software code that is able to process derutinizirovat trade, but does not guarantee the correct decision-making and may allow drawdown. Buying Advisor, you agree that you understand all the risks associated with trading Forex.

Related to item "Campeon 2012 strategy on the principles of the winner A":