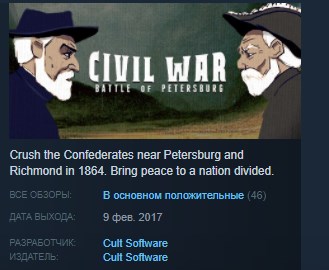 CIVIL WAR: BATTLE OF PETERSBURG is a turn based war game. Conquer the confederates in the last years of the American Civil War and bring peace to a nation divided. You play on a real battle map and battles take place mostly in historic locations, but troops have been balanced to have a more fun experience.
Features the following engagements:
Battle of the Crater
Bermuda Hundred
Battle of New Market Heights
Battle of Cold Harbor

Please be aware that the engagements are not always historically accurate and the main idea is to have fun on an immersive battle map. As a beer and pretzels game, the combat is fast paced and instantly satisfying!