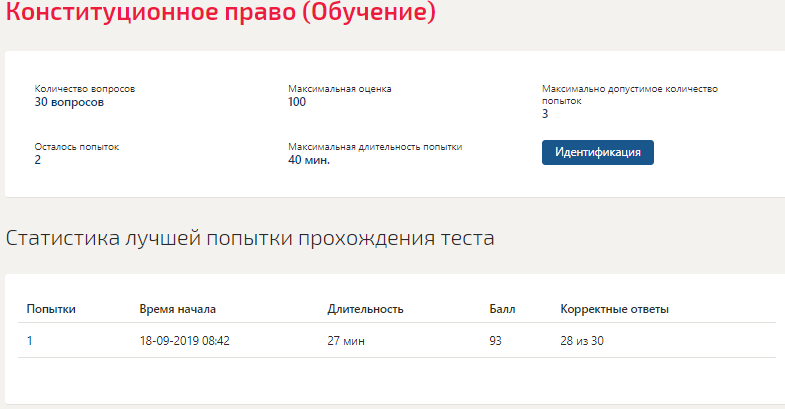 Constitutional law
Rating excellent
The set of all courts operating in the Russian Federation, taking into account the territorial structure of the state, united by a unity of tasks and principles of the judiciary, is ... the judicial system

Territorial units of the state, depending on the functional workload, are divided into ...
centralized and decentralized
general and special
universal and specialized

The modern Russian Federation in the form of government is ... a republic
presidential
parliamentary
mixed

According to the Constitution of the Russian Federation (Article 95), the State Duma consists of ...
450 deputies
150 deputies
630 deputies
250 deputies

A Russian citizen no younger than 35 years old, permanently residing in Russia may be elected President of the Russian Federation ...
not less than 15 years
from birth
not less than 10 years
not less than 7 years


To prepare, convene and conduct the constituent congress of a political party by citizens of the Russian Federation with the right to be members of a political party, an organizing committee shall be formed consisting of at least ...
10 people
70 people
50 people
30 people

Russian is considered such a public association, whose units are located in more than ...
subjects of the Russian Federation
1/2
1/5
1/4
1/3

The decision adopted at the referendum and the voting results for Russia as a whole are subject to official publication (promulgation) no later than ... after determining the results of the referendum

Set the correspondence between the types of subjects and their number in the Russian Federation:
Edges 9
Autonomous Okrug 4
Area 46
Republic 22

The Federal Law "On the State Language of the Russian Federation", which enshrined the status of the Russian language as the state language, was adopted on June 1 ...
1999 year
2005 year
1996 year
1993

According to their purpose in the mechanism of legal regulation, constitutional legal norms are divided into ...
eligible, binding and prohibitory
imperative and dispositive
material and procedural

The main task of the parliament is ...
assistance to the President of the Russian Federation when he uses conciliation procedures to resolve disagreements between public authorities
assistance in the implementation of the powers of the President of the Russian Federation on ensuring the coordinated functioning and interaction of public authorities
adoption of laws
increasing the level of confidence of citizens in the activities of the state

- this is a system of legal relations, fixing the way of organizing the state, in which the rights and freedoms of man and citizen are recognized and guaranteed, and the state is subject to the law and, above all, the democratic Constitution
Constitutional system

The Constitution of the Russian Federation establishes that a Russian citizen can independently exercise in full his rights and duties with ...
21 years
16 years
18 years
14 years

Under ... guarantees, we mean those legal means and methods by which citizens are provided with the realization of their rights and freedoms
legal
common
objective

In the Soviet Union, the first and only President was elected ...
M.S. Gorbachev