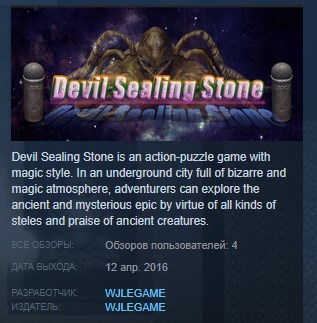 Devil Sealing Stone is an action-puzzle game with magic style. In an underground city full of bizarre and magic atmosphere, adventurers can explore the ancient and mysterious epic by virtue of all kinds of steles and praise of ancient creatures. Enemies and monsters will randomly appear in the underground city, and monsters will be bigger as one goes deeper into the end. However, players can collect props to increase styles of attack, as well as categories of skills and attack effects to strengthen themselves. Various BOSS with different styles and riddles are waiting to be explored by the player to discover the truth.

Game features
Random enemies. Types of enemies will change in every few minutes, and enemies will be more powerful as time passes.
Random stratagems. Dozens of types of stratagem will automatically assemble.
An attack pattern will be added every once in a while.
After getting the prop, it is available to additionally add diversified attack effects such as petrifaction, frost, slowdown and immediate death.
Original pieces of music over ten, which is addictive to people.
Various stories discussing humanity have increased fun in the game.
Epic-like plots have shaped a distant and mysterious world view.
Each skill can randomly appear low and high level, which will rest the moral quality of players.
Exquisite cut-scene will make players more integrated in the storyline.