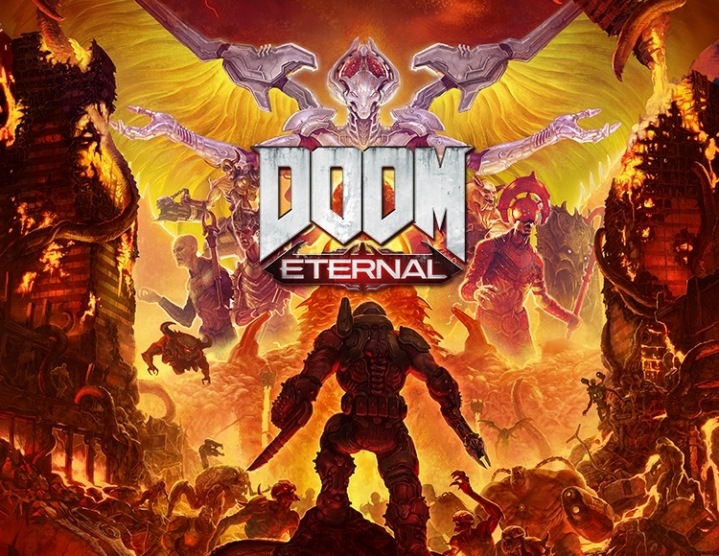 By making a reservation of the game DOOM Eternal
You get the key in the first minute of the official release!
You will receive the key in your account http://www.oplata.info.
Also the link to the page with the key will be sent to your email specified at the time of purchase.

***** Game Description *******
Issue the pre-order and get a set of the ripper. Arrange a real hell in hell!
The composition of the set ripper:
• New look for Battlemode mode: the same revenant dudets
• Master-level "Base sectarians" - Revised version of the familiar level with new challenges and surprises
• “Nostalgic” type of shotgun - Such a familiar shotgun from the original DOOM with a wooden butt. From it it is especially pleasant to shoot at hordes of demons in DOOM Eternal!
DOOM Eternal from id Software is a direct continuation of the DOOM® hit, which won the Best Action movie award at the 2016 Game Awards ceremony. Break through the measurements, crushing everything in your path with incredible strength and speed. This game sets a new standard for first-person shooters. It was created on the id Tech 7 engine and is accompanied by an explosive soundtrack from the composer Mick Gordon. Grab powerful weapons and in the role of Executioner Roca go to shred new and well-known demons who have invaded the unknown worlds of DOOM Eternal.
You are the Executioner of Doom. You have returned to Earth, captured by hordes of bloodthirsty demons. Now you have to destroy the hellish beasts, to uncover the mystery of the past and bring your great mission to the end.
Features:
The executioner has become more dangerous
Use the latest means of destroying the demons with which the executioner of Executioner Roca is equipped with Praetorian armor, including the shoulder flamethrower and the retractable blade of Fate on the wrist. Improved weapons and modifications (for example, a hook for meat attached to the superdrobovik, reducing the distance to the target), as well as new abilities (in particular, a double jerk) will add you strength and speed and make a truly universal soldier.
Unclean trinity
You will not be able to kill demons if you die, and resources are necessary for survival. Take away from the demons all that you need: restore health by brutal killings, burn enemies and get armor, cut them into a chainsaw and collect ammunition. All this will help you survive and become the greatest exterminator of demons.
New kind of disjointed demons
You have to send a bunch of demons into oblivion, each of them has unique skills and abilities. In addition to the classic creatures like the elementals of pain, archvilii and arachnotrons, you are waiting for the hordes of new fiend, including the Hunters of Doom, marauders and gladiators. Tear the enemies apart - the system of dismembering demons, embodied in the game DOOM Eternal, will allow you to get to the point with imagination.
Detected demon invasion
Diversify the game: while remaining a Executioner, allow other players to confront you in the form of demons. Or become a demon and invade the campaign of your friend or another player. Attack the players alone or together - let the Executioner know what real hell is.
Welcome to BATTLEMODE
BATTLEMODE is a new network mode in the 2 vs 1 format, invented by id Software. Armed to the teeth, the Executioner Roca will have to fight two dangerous demons under the control of the players-opponents for three rounds. Stay tuned for more details!

0
This product has not yet released