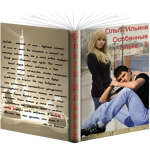 Love - sucks. And my - twice sucks. And if everything is clear to me, and the chances of hepiend absolutely not, my new girlfriend Olef even worse. It is many centuries waiting for his beloved, and that´s when she almost despaired, almost resigned, almost became another man´s wife, he suddenly appeared in the doorway. Yes, even my grandmother to my tutor bailiffs: the mysterious, inaccessible and ill-Man, which takes aback every time he looks at me. But now I have a goal: to get rid of the nasty type and help the new girlfriend again believe in love. Just how to do it if she did not believe in it?

The book is in PDF, please take this into account when buying.

If you are having problems with reading, payment, or downloading the book, I urge to contact me directly instead of leaving negative and unfounded opinions that lead to the blocking of my sales. E-mail address for communication: Liliana739@yandex.ru