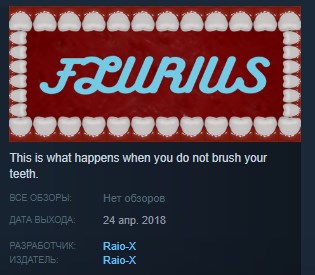 A group of dental surgeons sought to create a more effective method of combating oral bacteria and the damage caused by them, since products such as toothpaste and oral antiseptic remove only 99.9% of bacteria. After much study, they came to the conclusion that the only way to eliminate 100% of bacteria would be to eliminate them individually. So they partnered with the military to develop a micro-robot that could stand in front of the bacteria, eliminate them and repair all the damage done by them. And this micro robot was christened Flurius. Given name in reference to sodium fluoride (fluorine), which is the substance used in oral hygiene products most known to people, and serve as fuel for your jetpack.
Game modes
Normal
In the normal way, Flurius confronts bacteria in the mouths of ordinary humans like us. For this he is equipped with two machine guns, one to eliminate bacteria and another to remove aphtha, tartar and cavities.
Zombie

Flurius is also very effective against dead living bacteria. But here he faces them with shotgun.
- Why shotgun?
-Because it´s cool to kill zombie with shotgun.
And during the special mode, Flurius also enters the zombie mood and looks rusty
X-Ray
This is the thematic mode of the company, where everything gains an aspect of radiography and, both Flurius and the enemies gain neon colors. This time, Flurius is equipped with laser weapons.
Features
3 game modes