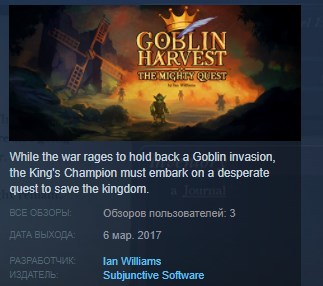 Goblin Harvest - The Mighty Quest is a procedurally-generated Strategy-RPG. It´s like playing a board game and "choose your own adventure" at the same time, where the two parts of the game connect and intertwine in a variety of exciting and intriguing ways.

Each turn, you´ll command your armies to attack the invading Goblins, then turn your attention to the King´s Champion´s quest. Only by working together can the King and his Champion hold back the invading hordes.