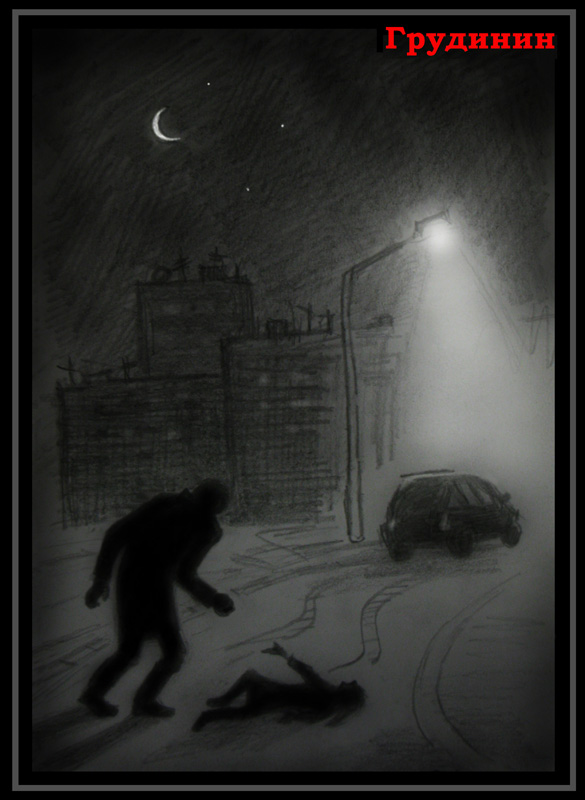 Businessman Alexei GRUDININ convinced that the world is living on one single law: might makes right. Is human society projection animal world in which there is a constant struggle for survival, for the best place in the sun, for the best female? And if so, then strong in life everything is possible, he says goodbye to advance any filth, any meanness, any crime.
When the night on an empty road GRUDININ knocked on his car a little girl, he does not feel any remorse. Is the wolf should worry about them slaughtered hare? He does not have and special concern for their fate. He, like almost every rich person in modern Russia is sure that it is easy to buy off the justice system.
Circumstances, however, add up to our hero's unexpected way: he is behind bars.
Will the colony in his convictions, whether he will stay or cynical scoundrel be able to overcome themselves and come prepared for purified from the crucible of his destiny?
The reader is invited to go on a fascinating psychological journey to the limits of human consciousness, to try on those extremely stressful situations that will get the main character of the novel.
The text is written in a classic style, long forgotten by modern writers. If you missed the figurative language of Leo Tolstoy, striking psychological scenes in the spirit of Dostoevsky, if you are experiencing or have experienced the inner struggle, accustomed to think and analyze yourself, the novel "GRUDININ" for you. It is a long time entice you, make re-evaluate their ideas about life.

... He stepped on the gas and the car went faster. The knocking became more clearly. Still, even faster. The sound is quite clearly stand out from the smooth hum of the engine. "Regulate or change something there? - Thinking GRUDININ starting to slow down gradually. - Well, if the warranty, and that kind of money popadёsh ... "He began to think about where to go tomorrow - in the original workshop or garage to the familiar mechanics that it looked at first - not in vain if his panic, and is not whether to submit a claim Fedorov. But he decided that he would go in the morning to Stepanych, and simultaneously call Fedorov and try to find out from him - whether he knew about the problem with the suspension is at this very moment some gray shadow flashed in front of the headlights, and in a moment something soft hit the bumper and rolled through the windshield. He pressed the brake pedal to the floor, and shook the car skidded. By some high, similar to the sound of howling animal, he decided that knocked the dog. He sighed heavily, swore and leaving lights switched out of the car to inspect the damage. On the windshield with streaks of blood he saw something light - a piece of cloth, to cling to the janitor and fluttered in the wind. He turned back. On the road behind the car slowly moved, as from side to side rolled over something light, long and thin. He came. On the pavement, in the dim yellow light of the lantern he saw a girl of about ten or twelve, in long, knee-length boots and secured to the abdomen beige, tight win thin leather belt coat. It is a moment, speechless, standing on the spot. Then he took a step and looked into her face. Now he did not remember her features, but I remember that his country was struck by her pallor, already turning into some deathly blue. The girl did not say no sound and did not move. "I Am Alive?" - He thought. And - first gently, then - more he pushed her in the chest, where there was no blood, leg. The movement seemed to him then the most correct and natural. Suddenly she opened her eyes and looked at him calm and confident look, the way watching adults. This view is, for some reason, like an electric shock hit him, he will remember for a lifetime. He winced and involuntarily stepped back. But calm the girl's face almost immediately took a painful expression. Extricated from beneath a thin arm, she held it up to him and said, through the power of "Pomo ... Help ..." Her throat gurgled something, and dёrgayuschiesya bloodless lips were bloody bubbles.
"What? What ... - he told himself, stepping back. - What do we do now? "
Girl watching him blink rapidly, abundant tears glistening eyes, tried to stand up, not lowering extended to him, more and more shaky hand.
- Pomo w ... ... - she began to speak, but without completing the words choked with blood and tumbled helplessly back, swung his head on the asphalt.
"No one, it is necessary to go," - he said, making another step back. This phrase was first uttered meaningful, heartfelt as his current proshibla. He spun on his heel and walked resolutely to the car. He sat down, glancing in passing on the hood - to assess the damage from the impact. It seems a little - twenty thousand.
Roared the engine, the car took off and turned and raced down the highway in the opposite direction. For a split second it seemed to him that in the rearview mirror through the smoke snow flown newly-fallen snow flashed another human figure, too, as if the children - running across the road and waved his arms over his head thin. He increased speed, bent over the wheel, looking for the next turn. Here, here it is! Very, so that the brakes squealed, turned and went, dragged down by some unknown, are not lit and gloomy street with huge snowdrifts along the roadside.