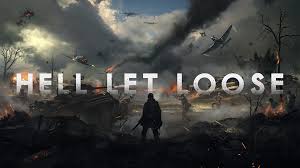 ABOUT THE GAME:
You never fought in World War II the way it was supposed to be: with the rumble tanks ruling the battlefield, the need to maintain supply chains for the front lines - but now you can feel like a gear in a huge combined arms battle machine. Hell Let Loose sends the player into the chaos of war, where he will have to control the machines, shift the front line and rely on team play, thus changing the combat situation.

The battlefield is an extensive map, modeled on real aerial photography and satellite data, and is divided into large sectors, which allows you to create unexpected and always unique situations that cause fifty players on each side of the constantly changing front line to fight not for life but for death - in open spaces, on bridges, in dense forests and on city streets. Captured sectors give the team one of three resources - such mechanics form a meta-game that affects the movement of troops to victory.

1. You must download and install Steam - http://steampowered.com/download/SteamInstall.msi (if not already installed)
2. Register a new account on Steam or go to an existing one.
3. Go to "My Games" and select "Activate via Steam" and enter the key received immediately after payment.
4. After activation, the game appears in the list of games and you can download it from steam.

Life is Feudal: Your Own (RU/UA/KZ/CIS)

🔥PlayStation Plus Subscription - 1 Month (RUSSIA ONLY)