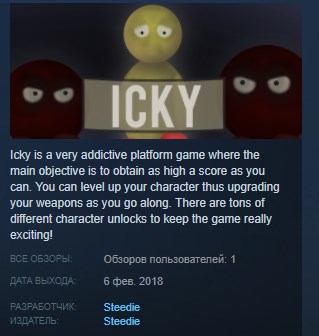 ‘Icky’ is an extremely addictive 2D platformer game where your main objective is to collect as many orbs as you can while having to avoid the red creatures who will constantly be in your way. The game will get harder and harder as you collect more orbs, eventually becoming very challenging as get a higher score. By killing the red creatures you are rewarded with credits which allow you to purchase awesome skins for your character that you can use in game and that show your excellence as a player. If you let them reach the bottom, they have a chance of becoming mutated and growing in size which will make it far more challenging. While playing the game, you will pick up new skills that will help you get a higher score when playing.

By collecting the orbs, not only will you gain points for your game, you will also earn experience points which will contribute to your player level. When you level up your gun will automatically be upgraded which means your gun will have a higher rate of fire, and your bullet velocity will be increased.

With an upgraded weapon, you will be able to defeat more of the red creatures which will help you earn credits quicker and achieve all the awesome player skins.

The game possesses an arcade style of gameplay however keeping a cartoon modern art style which is an awesome mix for a game like this.
You will find yourself playing this game for hours at a time while leveling your character infinitely and obtaining a better weapon and a far cooler character as your having fun playing the most addictive game out there!