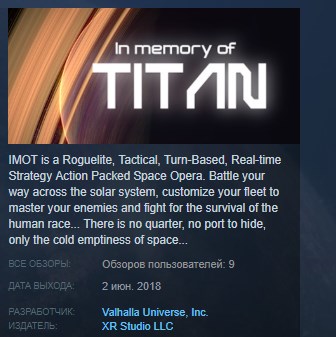 Tactics? Turn-Based? Real-Time? Roguelite?
You grew up playing Turn-Based Tactics and RTS but always wanted to have the best of both worlds... The action packed thrill of the RTS, the customization of an RPG and the depth of the Turn-Based games. You always wanted more...? We´ll like to introduce RAPSO (Roguelite-Action-Packed-Space-Opera). Behold a modern blend of Tactical Turn-Based RPG games (Front Mission, Final Fantasy Tactics, etc), with RTS games (Starcraft, C&C, Homeworld, etc) and Roguelite elements for flavor; all that plus multiplayer, co-op and procedural generated missions and you´ll get a never ending, ever changing RAPSO.

*Multiplayer, Co-Op and Procedural-Generated missions are still not implemented.

Features: (Upon Full Release)
RAPSO: Venture into the solar system with procedurally generated side missions and quests.
TurnBased/RTS Action: Initiative roll based turns with active consequences... Weapons systems, perks, passive support and more; affect other ships and players in real-time.
Exploration: Different systems, missions, loot, ships... Fortune will smile upon the most adventurous.

The way home is full of many different paths, each one more rewarding than the other; and is your job as a commander to venture across the vast loneliness of space to protect Terra and all mankind. Or band with your friends and battle your enemies as a group, even other commanders will fall to your, in our Action-Packed PvP.