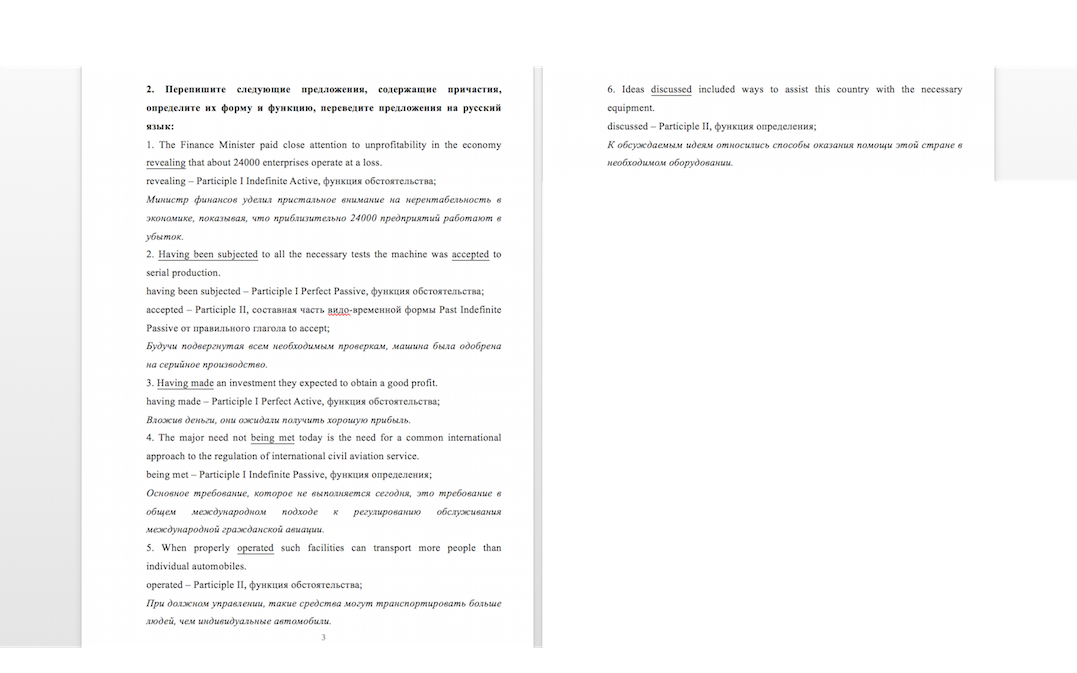 КОНТРОЛЬНОЕ ЗАДАНИЕ № 3
Вариант 1
1. Перепишите следующие предложения, определите время глагола-сказуемого в страдательном залоге, переведите предложения на русский язык:
1. Workers in these areas are required to wear protective clothing.
2. By the time this is read the new technologies will have been introduced.
3. In view of personnel shortages the production plans are not being fulfilled.
4. The growth of unemployment rate was made away with (устранять).
5. The budget had to be cut down.
6. Measures against scarcity ought to be taken.

2. Перепишите следующие предложения, содержащие причастия, определите их форму и функцию, переведите предложения на русский язык:
1. The Finance Minister paid close attention to unprofitability in the economy revealing that about 24000 enterprises operate ata loss.
2. Having been subjected to all the necessary tests the machine was accepted to serial production.
3. Having made an investment they expected to obtain a good profit.
4. The major need not being met today is the need for a common international approach to the regulation of international civil aviation service.
5. When properly operated such facilities can transport more people than individual automobiles.
6. Ideas discussed included ways to assist this country with the necessary equipment.

3. Письменно переведите предложения, определяя форму и функцию герундия:
1. Balancing the federal budget would stabilize prices.
2. This firm needs comprehensive auditing.
3. In business the price of being unprepared is often high.
4. The contract was made valid by having been extended for another term.
5. These economic benefits are largely due to our having joined the Common Market.
6. The workers stopped striking after having negotiated with managers.

4. Прочитайте предложения, перепишите их, определяя форму и функцию инфинитивов, переведите предложения на русский язык:
1. To widen bilateral trade is of great benefit for both countries.
2. To remain competitive we can′t raise prices.
3. This firm can’t have become bankrupt!
4. The problems with supplies might have been eliminated long ago.
5. First the manager defines the task to be done.
6. They must have been negotiating for two hours already.

5. Перепишите и переведите предложения, содержащие усилительную (эмфатическую) конструкцию it is…that и согласование времён:
1. It was the industrial revolution that changed the rural society into an urban one.
2. It is only in the summer period that our restaurant is open all day.
3. The Belfast aerospace group yesterday announced that 700 workers would be made redundant.
4. He indicated that new benefits for employees had been introduced by his company.
5. The engineers asked if the work could be compressed into 6 days.

6. Письменно переведите текст:
Primary Functions of Money
Generally, economists have defined four types of functions of money which are as follows:
(i)Medium of exchange
(ii)Measurement of value;
(iii)Standard of deferred payments
(iv)Store of value.
These four functions of money have been summed up in a couplet which says: Money is a matter of functions four: a medium, a measure, a standard and a store.
These functions have been presented below:
(i) Money as a Unit of Value:
Money measures the value of various goods and services which are produced in an economy. In other words, money works as unit of value or standard of value. In barter economy it was very difficult to decide as to how much volume of goods should be given in exchange of a given quantity of a commodity.
Money, by performing the function of common measure of value, has saved the society from this difficulty. Now the value of various goods and services are expressed in terms of money. In this way, money works as common measure of value by expressing exchange value of all goods and services in money in the exchange market.

(ii) Medium of Exchange:
Right from the beginning, money has been performing an important function as medium of exchange in the society. Money facilitates transactions of goods and service as a medium of exchange. Producers sell their goods to the wholesalers in exchange of money. Wholesalers sell the same goods to the consumers in exchange of money.
In the same way, all sections of society sell their services in exchange of money and with that buy goods and services which they need. Money, working as medium of exchange, has eliminated inconvenience which was faced in barter transactions. However, money can operate asmedium of exchange only when it is generally accepted in that role. Bank money can be treated as money simply on the basis of its general acceptability for it is highly useful.
(iii) Standard of Deferred Payments:
Modem economic setup is based on credit and credit is paid in the form of money only. In reality the significance of credit has increased so much that it will not be improper to call it as the foundation stone of modem economic progress. Money, besides being the basis of current transactions, is also the basis of deferred payments. Only money is such a commodity in whose form accounts of deferred payments can be maintained in such a way so that both creditors and debtors do not stand to lose.
(iv) Store of Value
It was virtually impossible to store surplus value under barter economy; the discovery of money has removed this difficulty. With the help of money, people can store surplus purchasing power and use it whenever they want. Saving in money is not only secure but its possibility of being destroyed is very less. Besides, it can be used whenever needed. By facilitating accumulation of money, money has become the only basis of promoting capital formation and modern production technique and corporate business facilitated there from.
NOTES: Couplet [‘kuplit] – куплет
Surplus value – прибавочная стоимость
Purchasing power – покупательная способность