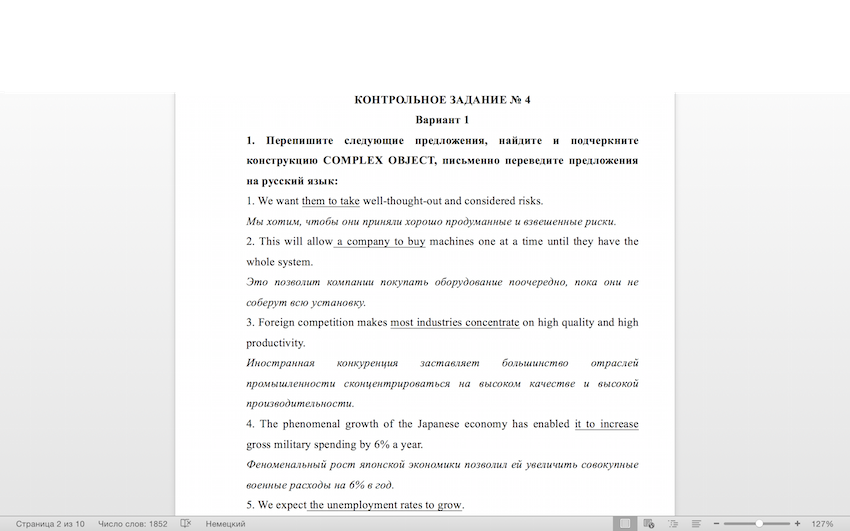 КОНТРОЛЬНОЕ ЗАДАНИЕ № 4
Вариант 1
1. Перепишите следующие предложения, найдите и подчеркните конструкцию COMPLEX OBJECT, письменно переведите предложения на русский язык:
1. We want them to take well-thought-out and considered risks.
2. This will allow a company to buy machines one at a time until they have the whole system.
3. Foreign competition makes most industries concentrate on high quality and high productivity.
4. The phenomenal growth of the Japanese economy has enabled it to increase gross military spending by 6% a year.
5. We expect the unemployment rates to grow.
6. A person wants his work to be not only well-paid but to be a challenge.

2. Перепишите следующие предложения, найдите и подчеркните конструкцию COMPLEX SUBJECT, письменно переведите предложения на русский язык:
1. They appear to be suitable for the job.
2. Petroleum reserves are thought to be adequate for some time to come.
3. The effects of loud noise have been known to cause delays in the work cycle.
4. This fiscal year is not likely to be a very happy one.
5. Economic cooperation is sure to benefit both of the countries.
6. The Industrial Revolution in Great Britain is often said to have been based on coal and iron.

3. Перепишите и письменно переведите предложения, содержащие независимый причастный оборот:
1. The situation on the Exchange being favourable, they bought the shares.
2. The choice having been made, all the other alternatives have been rejected.
3. The companies must be privatized, no more than 10% of their shares remaining in government hands.
4. Consensus having been reached, both parties were satisfied.
5. With domestic savings squandered (разбазаривать), the country’s dependence on foreign finance is increased.
6. Circumstances permitting, the production will be expanded.

4. Прочитайте предложения, содержащие формы сослагательного наклонения, письменно переведите на русский язык:
1. An ideal solution would be to create partnerships between industry and science.
2. I suggest that we should get down to business.
3. He looked so miserable as if his business had been ruined.
4. But for deflationary measures the rate of inflation couldn′t have been slowed down.
5. I wish I had a good book-keeper.
6. Don′t expose these goods to the light lest they should be spoiled.

5. Письменно переведите условные предложения, определите типы условных предложений:
1. I won′t go outside the organization to hire managers if I don’t have to.
2. If demand matched production there would be no need to store goods.
3. If necessary measures had been taken at the design stage these faults would have been avoided.
4. If we doubled nuclear capacity we would reduce CO2 emission by about 6%.
5. Unless America had maintained its technological lead Iran and Mexico would have flooded the USA with products made from cheap oil and gas.
6. Technological advance brings many benefits but it also brings many social evils if it goes unchecked.

Division of Labour
The division of labour is the specialization of cooperating individuals who perform specific tasks and roles. Historically, an increasingly complex division of labour is associated with the growth of total output and trade, the rise of capitalism, and of the complexity of industrialised processes. The concept and implementation of division of labour has been observed in ancient Sumerian (Mesopotamian) culture, where assignment of jobs in some cities coincided with an increase in trade and economic interdependence. In addition to trade and economic interdependence, division of labour generally increases both producer and individual worker productivity. In contrast to division of labour, division of work refers to the division of a large task, contract, or project into smaller tasks–each with a separate schedule within the overall project schedule. Division of labour, instead, refers to the allocation of tasks to individuals or organisations according to the skills and/or equipment those people or organisations possess. Often division of labour and division of work are both part of the economic activity within an industrial nation or organisation.
The main focus of Adam Smith′s The Wealth of Nations lies in the concept of economic growth. Growth, according to Smith, is rooted in the increasing division of labor. This idea relates primarily to the specialization of the labor force, essentially the breaking down of large jobs into many tiny components. Under this regime each worker becomes an expert in one isolated area of production, thus increasing his efficiency. The fact that laborers do not have to switch tasks during the day further saves time and money. Of course, this is exactly what allowed Victorian factories to grow throughout the nineteenth century. Assembly line technology made it necessary for a worker to focus his or her attention on one small part of the production process. Surprisingly, Smith recognized the potential problems of this development. He pointed out that forcing individuals to perform mundane and repetitious tasks would lead to an ignorant, dissatisfied work force. For this reason he advanced the revolutionary belief that governments had an obligation to provide education to workers. This sprung from the hope that education could combat the deleterious effects of factory life. Division of labor also implies assigning each worker to the job that suits him best. Productive labor, to Smith, fulfills two important requirements. First, it must «lead to the production of tangible objects». Second, labor must «create a surplus» which can be reinvested into production.
Another main concern for Smith involved tracing the roots of value. He identified two different kinds of value, «use value» and «exchange value». The concept of exchange value interested Smith considerably. The diamond-water paradox, in particular, proved puzzling to him: Why is it that diamonds, which have very little practical use, command a higher price than water which is indispensable to life? By discovering the true source of value Smith hoped to find a benchmark for measuring economic growth. The value of goods can also be referred to as the «natural price». The natural price need not function as the actual cost of goods in the marketplace. Competition, however, was expected to push the market price towards the natural price.