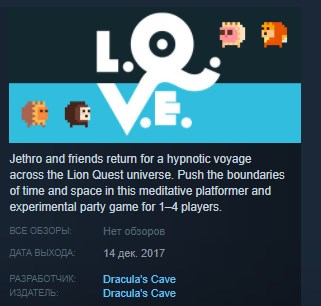 http://store.steampowered.com/app/659570/LQVE_Lion_Quest_Versus_Expanded/
💎💎💎💎💎💎💎💎
( Steam Key / Region Free ) GLOBAL ROW
Jethro and friends return for a hypnotic voyage across the Lion Quest universe. Push the boundaries of time and space in this meditative platformer and experimental party game for 1–4 players.

New worlds including the dimension-shifting Enigma 2.0, Looper – the VS map that doubles up as a working drum machine, and M1: Quest – a crossover with the visual novel game made by Dracula’s Cave.

Lion Quest mechanics rebuilt from the ground up to allow for more precise platforming, all new visual effects and game-changing powerups.

8 single-player tournaments, traditional platforming made un-traditional in Lion Quest Delta, unconventional Special Games and a plethora of unlocks to keep you busy.

Introducing: Jimmy the Sloth. If there’s one thing that was missing from the original Lion Quest, it was a Sloth.