Making History: The Calm and the Storm Gold Edition 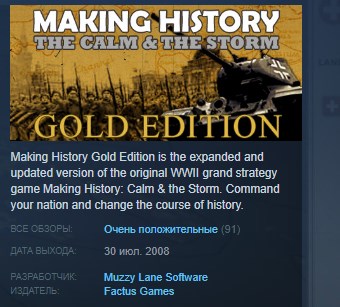 Making History: Calm & the Storm Gold Edition is a turn-based grand strategy classic. Play against the world or join an alliance. Attempt to alter history or replay it. This release includes many game updates, key improvements to strategic and tactical gameplay, and features a new Germany focused scenario: "The Rise of the Reich".

In addition to managing the military, players must build, supply and grow a modern industrial base in order to field forces capable of victory. The decision to expand factories, research new weapons or recruit more units is in the hands of the player. War will come and the nation must be prepared.

FEATURES
Clean, intuitive interface and gameplay make this one of the easiest grand strategy games to learn, and the open nature of the game combined with the ability to play as any one of over 80 nations offer endless replay-ability.

Different victory conditions available: Nation, Alliance, or Ideological (Democracy, Communism, Fascism, or Authoritarianism) You can also go for a domination victory and set the percentage of land you need to control to win the game.

Ten scenarios included with multiple starting points before and during the war. Plus alternate history and the fantasy scenarios.

Decide how much of your production is used to generate wealth, stockpile arms, build military units, conduct research, or construct more factories.

Related to item "Making History: The Calm and the Storm Gold Edition":