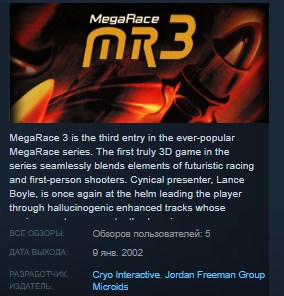 Forget about car races. Now, encouraged by a cheering crowd and the wild commentaries of Lance Boyle, you will be piloting vessels specially conceived for speed and combat, in environments that change with each race. Instead of a being given a low-powered shotgun, the player is provided with a lean machine built for speed and war at their fingertips.

In a totally wild virtual universe, the hallucinogenic projection of what TV will be showing in the future, it´s a unique game that re-creates both a spectacular race, and a great first person shooter. Cynical presenter Lance Boyle is at the helm of sending out brave drivers in a daredevil challenges. All the ships are modular and according to your results, you will be able to personalise them. Different modules are available to improve the engine characteristics, including the battle armour and the weapons.
Fasten your seat belts...

* Aggressive, high-velocity, futuristic racing on the micro scale
* Take part in a game show that will blow up a city to increase its audience
* There’s no such thing as too much of Virtual TV’s very own Lance Boyle