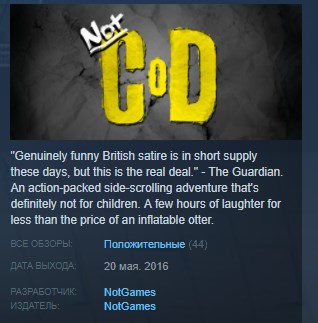 http://store.steampowered.com/app/435460/NotCoD/
💎💎💎💎💎💎💎💎
More offensive than a Donald Trump presidency, funnier than a toddler walking into a plate glass window, and ruder than a Hard Brexit up your Theresa May... It´s NotCoD: Call of Judy.

From the acclaimed team behind NotGTAV comes this extremely British side-scrolling run and gun romp through the quaint country parish of St. Bumley on the Taint.

An affectionate parody of the world famous Call of Duty games, NotCoD is crammed to the eyeballs with jokes, mini-games, jokes, achievements, stats, jokes, intel and Easter Eggs. And also there are jokes.

All of the art is hand drawn, every sound effect made with just our voices, and we even did our own versions of Zombies and Online Multiplayer that unlock as you progress through the 3-4 hour single player campaign.

NotCoD is fully controller compatible for that authentic "console but better" PC experience and comes with more options than a Tax Return, and arguably less crying.

WARNING: NotCoD has quite a lot of, shall we say, colourful language and adult themes. To be fair, there´s an option to turn the swearing off, but it really doesn´t make the game any less offensive. If anything, your brain tends to fill in the bleeps with something more disgusting than we originally wrote.