Oliver Stone, The Untold Story US 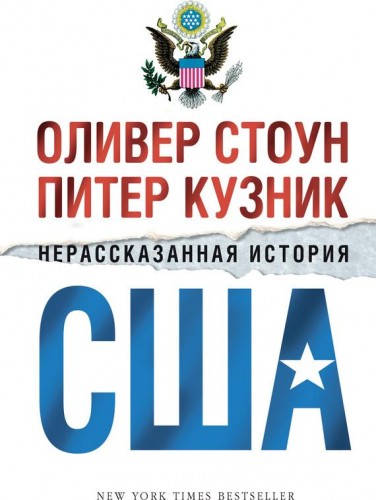 THE_BEST information about the seller and his items
offlineAsk a question

If you are unhappy with a product you purchased, the seller will return your money within 3 days from the moment of purchase.

We do not want to repeat again the history of our country is impossible. We seek to shed light on what we consider a betrayal of the ideas that formed the basis of its historical mission, as it seems to us that there is still hope to correct these errors before the XXI century finally come into its own. We are deeply concerned about the course taken by the United States in recent years.
Why our country is placed in all corners of the globe its military bases, the total amount of which, according to some estimates, exceeded one thousand? Why SShAtratyat on their armed forces more money than all other countries put together? Why does our government still contains a huge arsenal of nuclear weapons, most of which is in constant combat readiness, although, in fact, no country today does not represent an immediate threat to us?
Why small minority of wealthy Americans are allowed to have such a powerful impact on the internal and external policies of the United States and the media, while the masses suffer from the decline in living standards, and their voice is heard in politics weaker? Why do Americans have to put up with the constant surveillance, state intervention in their personal affairs, violation of civil liberties and the loss of the right to privacy?
It would be plunged into the horror of the founding fathers and past generations of Americans. Why in our country are the ones who are driven by greed and narrow-minded selfishness, ruled by those who advocate such social values \u200b\u200bkakdobrota, generosity, compassion for others, a community of interests, and faithful to the ideals of the whole people?
And this is only a small part of the questions that we ask in this book. And although we do not expect that will be able to find answers to all of them, we will try to present the historical facts so that readers are able to delve into the study of self-interest questions. In the history of the American Empire little good. But we need to honestly and openly talk about it, if we want the United States to ever dare to go on fundamental reforms that will allow them to play a leading role in promoting humanity forward, instead of in every possible way to slow its progress.
Oliver Stone, Peter Kuznik
Contents:
Chapter 1 The First World War: Wilson against Lenin
Chapter 2 The New Deal: I welcome their hatred
Chapter 3 The Second World War: Who actually won Germany?
Chapter 4 Bomb: the tragedy of the little man
Chapter 5 The Cold War: who started first?
Chapter 6 Eisenhower: ugly picture
Chapter 7 John F. Kennedy: The most dangerous moment in human history
Chapter 8 Lyndon B. Johnson defeated Empire
Chapter 9 Nixon and Kissinger: A madman and psychopath
Chapter 10 The collapse of detente: midday darkness
Chapter 11 Years Reagan death squads protecting democracy
Chapter 12 The end of the Cold War: the missed opportunities
Chapter 13 Fiasco Bush-Cheney: The gates of hell were opened in Iraq
Chapter 14 Obama: HelpOnAdministration wounded empire?
EBook Format: fb2.
Size 19 mb
Read worth

Related to item "Oliver Stone, The Untold Story US":

OLO cod Code for access to FCS. plus 2 for free