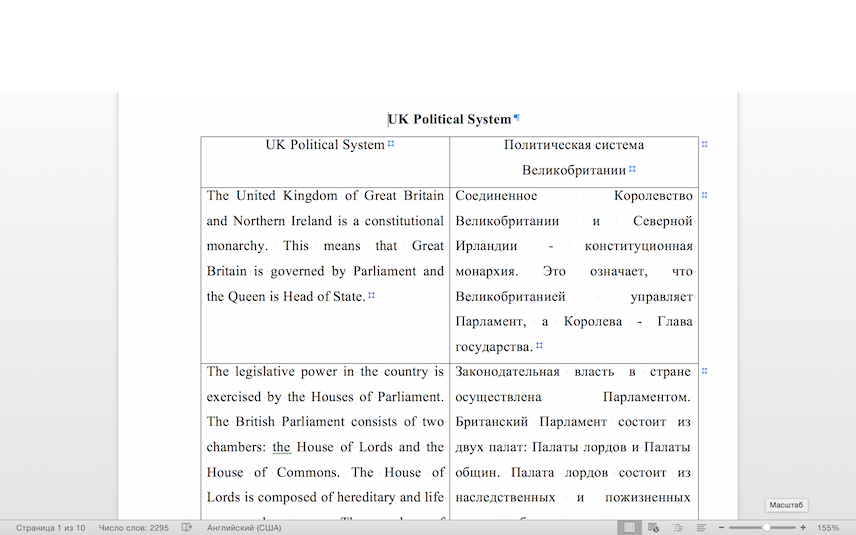 UK Political System
The United Kingdom of Great Britain and Northern Ireland is a constitutional monarchy. This means that Great Britain is governed by Parliament and the Queen is Head of State.
The legislative power in the country is exercised by the Houses of Parliament. The British Parliament consists of two chambers: the House of Lords and the House of Commons. The House of Lords is composed of hereditary and life peers and peeresses. The members of the House of Commons are elected by the people from the constituencies in England, Scotland, Wales and Northern Ireland. The House of Commons is the real governing body of the United Kingdom. In order to become a law, a new bill proposed by the Cabinet must be approved by both houses of Parliament. The Lords cannot veto a bill, but they can delay it for a maximum of one year. Financial bills cannot be delayed by the House of Lords.
The executive power of the Crown is exercised by the Cabinet, headed by the Prime Minister. The government is usually formed by the political party which is supported by the majority in the House of Commons. The Prime Minister is the majority party leader and is appointed by the Queen. The Prime Minister chooses a team of ministers, 20 of the ministers are in the Cabinet.
The second largest party becomes the official opposition with its own leader and the Shadow Cabinet. Government in Britain since 1945 has alternated between only two political parties, the Conservatives (the Tories) and the Labour Party. No other party has been in office at all since 1945 and there have been no coalitions.
The judiciary branch of the government determines common law and is independent of both the legislative and the executive branches. There is no written constitution in Great Britain, only precedents and traditions.

Civil Law
The civil law of England, Wales and Northern Ireland covers business related to the family, property, contracts and torts. It also includes constitutional, administrative, industrial and other laws.
Civil proceedings as a private matter can usually be abandoned or ended by settlement between the parties at any time. Actions brought to the court are usually tried without a jury. Higher courts deal with more complicated civil cases. Most judgments are for surns of money and the costs of an action are generally paid by the party losing it.
The main categories of English civil Law are:
Contracts: binding agreements between people or companies.
Torts: wrongs committed by one individual against another individual’s person, property or reputation:
Trusts: arrangements whereby a person administers property for another person’s benefit rather than his own.
Probate Law: arrangements for dealing with property after the owner’s death;
Land Law.
Family Law

The President is the head of the executive branch of the government; he appoints the members of the Cabinet. The Cabinet advises the President on many matters and is composed of the heads of ten executive departments: Secretary of State, Secretary of the Treasury, Secretary of Defence and others.
The judicial branch of the government is headed by the Supreme Court which settles disputes between the states. The Supreme Court may veto any law passed by the Congress if it contradicts the Constitution of the USA.
The United States is a federal Union, and the President is the head of the Federal government which deals with international problems and national matters. But every state has its own constitution and the state government headed by the Governor managing its local affairs. Their laws and decisions must not contradict the Constitution of the USA.

Criminal Law
Crime is a part of public law - the law regulating the relations between citizens and the state. Crimes are acts which the state considers to be wrong and which can be punished by the state. There are some acts which are crimes in one country but not in another. For example, it´s a crime to drink alcohol in Saudi Arabia, but not in Egypt. In general, there is quite a lot of agreement among states as to which acts are criminal. A visitor to a foreign country can be sure that stealing, physically attacking someone or damaging their property will be unlawful But the way of dealing with people suspected of crime may be different from his own country.
Elements of Proof
In many legal systems it is an important principle that a person cannot be considered guilty of a crime until the state proves he committed it. The suspect himself need not prove anything although he will of course help himself if he can show evidence of his innocence. The state must prove his guilt according to high standards and there are elements that must he proved. In codified systems, these elements are usually recorded in statutes. In common law systems, the elements of some crimes are detailed in statutes; others, known as ‘common law crimes’, are still described mostly in case law.
There are usually two important elements to a crime: 1) the criminal act itself; and 2) the criminal state of mind of the person when he committed the act. In Anglo-American law these are known by the Latin terms of 1) Actus Reus and 2) Mens Rea.

Branches of Law
One important distinction is between civil law and public law. The main categories of English civil law are: contracts, torts, trusts, probate law, family law and land law. The main categories of public law are:
Criminal Law considers wrongs which, even when committed against an individual, can harm the well-being of society in general;
Constitutional Law: regulation of how the law itself operates and of the relation between private citizen and government;
International Law: regulation of relations between governments and also between private citizens of one country and those of another.
The standards of proof are higher in a criminal action than in a civil one. In English law the prosecution must prove the guilt of a criminal "beyond reasonable doubt". Thus, in a criminal case a crime cannot be proven if the person or persons judging it doubt the guilt of the suspect and have a reason (not just a feeling or intuition) for this doubt. But in a civil case, the court will consider all the evidence and decide what is most probable.
Criminal and civil procedures are different. Criminal actions are nearly always started by the state. Civil actions, on the other hand, are usually started by individuals.
In Anglo-American law, the party bringing a criminal action is called the prosecution, but the party bringing a civil action is the plaintiff. In both kinds of acti