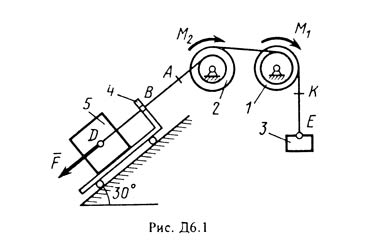 Sold: 0
Uploaded: 25.07.2013
Content: d6-10.rar 107,55 kB
Loyalty discount! If the total amount of your purchases from the seller TerMaster more than:
If you want to know your discount rate, please provide your email:

TerMaster information about the seller and his items
offlineAsk a question

Solution of the D6 version 10 of teormeh of Manuals Targ SM 1988 (also coincides with the problem D8 Targ 1983). Check the condition to the task D6 (p. 56 training manual Targ SM): The mechanical system consists of the bodies 1, 2, 3, 4, 5, having a weight of P1, P2, P3, P4, P5, respectively; body systems are linked filaments wound on the stepped blocks 1 and 2 (Fig. D6.0, D6.9, Table. D6). A dash in the table columns, which are given weight, means that the relevant body is not included in the system (the drawing is not displayed), a zero in the columns of the table means that the body is considered weightless but in part (in the figure should be shown). For wheels, numbered 4, P4 - their total weight (the weight of such a platform truck is not considered). Radii step Units 1 and 2 are, respectively: R1 = R, r1 = 0,8R; R2 = R, r2 = 0,4 R. When calculating the moments of inertia of both blocks, wheels and rollers assume uniform cylinder of radius R. In the system in addition to the forces of gravity are the force applied to the body F. 4 or 5 (if the body 5 is not included in , the force applied to a point in the trolley), and a pair of forces with the moment M1 and M2, attached to blocks (for M <0 the direction opposite to the time shown in the figure). On thread portion indicated in the table under "Spring", including spring with stiffness coefficient s (for example, if the column should AB, AB is the portion of the spring, if the AD AD spring, etc.); initially the spring is not deformed. Create Lagrange equations for the system and to determine the frequency of them and the period of oscillations of bodies committed at its movement.

After payment, you will be prompted to download the solution of D6 B10 (Figure 1 the condition 0) on the theoretical mechanics of Reshebnik Targ SM 1988 for external students. Solution fulfilled by methodical instructions and control tasks for part-time students of energy and other specialties. The decision formalized in the format word / pdf / manuscript in jpg or gif, packed to the archive zip.

I would be very happy if after passing the solutions you return to the site and leave a positive review. Believe me, for me it is very important.
Thanks in advance.