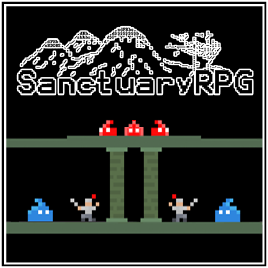 💎💎💎💎💎💎💎💎
Press Mentions:
"Describing SanctuaryRPG as a huge, hilarious and most honorable devourer of free time would be an understatement." -RockPaperShotgun
"It’s got a very old-school vibe thanks to the ASCII graphics and UI, but the combat feels modern and intelligent." -Destructoid
“SanctuaryRPG makes great use of it’s setting, sprinkling it with weirdness and comedy.” -PC Gamer Magazine
"Where the game really shines in terms of gameplay is in promoting player choice in all things and making those choices matter." -Gamasutra

Drawing heavy inspiration from both Roguelikes and Japanese RPGs, the developers have poured over 10,000 hours of work into the game, meticulously designing every aspect to offer a truly compelling and deeply replayable gameplay experience.

With dynamic combat, hilarious dialogue, and plenty of weapons at your disposal, this is truly the most ambitious ASCII-art RPG of 2014.