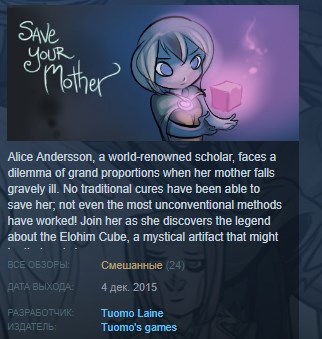 Embark upon an unconventional quest to Save Your Mother!
Alice Andersson, a world-renowned scholar, faces a dilemma of grand proportions when her mother falls gravely ill. No traditional cures have been able to save her; not even the most unconventional methods have worked! Join her as she discovers the legend about the Elohim Cube, a mystical artifact that might be their only hope. Long lost to the sands of time, the Cube is said to possess incredible healing powers. Over the ages, many have attempted to retrieve the cube, but to no avail. All were foiled by the long and arduous path that leads to the cube, and in turn, salvation. Will you be able to unravel the mysteries of the Elohim Cube?

A little info about this game
"Save your Mother" is the final version of a highly successful RPG Maker game; originally created within one month for the "Quest for Fun" contest. The original version won the first place and was downloaded by 39288 people before the download was removed at the end of the contest. This new version improves on every single aspect of the game, including a rework of many key components in preparation for the game´s commercial debut, but still staying true to the charming spirit of the original game. Nearly three years of work and love has went to making the game as lovable as humanly possible!
Features
Save Your Mother! is a turn-based RPG with puzzle elements. While this combination may seem all too familiar, the fast- paced combat scenes and intricate characters set this game apart.
Rapid combat with epic special moves!
Hand painted cutscene art and character with a variety of emotions, blinking and mouth movement complements the intense and emotional plot.
The inspiring but eerie soundtrack will evoke a variety of emotions from fear to happiness and will set the stage for intense battles and emotional story scenes.
Unlock the special "hardcore" mode to add challenges and replay value!
Steam achievements and Trading Cards are included, so happy collecting!
Praise for "Save Your Mother"
JukanHirokutora says:
"Definitely one of the best RPG maker games I played!"

Misami-Chan says:
"This game is outstanding!"

thatbennyguy says:
"I really enjoyed your game "Save Your Mother". It was a joy to play, and it really did deserve first place. Hope you´re using the prize money wisely!"

Artoken says:
"I just played it and like it! I didn´t feel the time running by xD, nice work!"