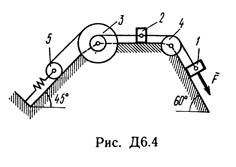 Uploaded: 04.07.2013
Content: d6-44.zip 43,47 kB
Loyalty discount! If the total amount of your purchases from the seller TerMaster more than:
If you want to know your discount rate, please provide your email:

Solution of the D6 Option 44 - termehu of Targa SM 1989. Conditions to task Dynamics 6: Mechanical system includes loads 1 and 2, a stepped pulley 3 degrees with radii R3 = 0,3 m, r3 = 0,1 m and the radius of inertia about the axis of rotation ρ3 = 0,2 m, the radius of the block 4 R4 = 0,2 m and the roller (or mobile unit) 5 (Fig. D6.0 - D6.9, see Table. D6); body 5 is considered a solid homogeneous cylinder and the mass unit 4 - uniformly distributed over the rim. The coefficient of friction of the cargo plane f = 0,1. The bodies of the system are connected to each other threads thrown over blocks and wound on the pulley 3 (or a pulley and a skating rink); Lots of threads are parallel to the planes. To one of the bodies is fixed with a spring stiffness coefficient c. Under the force of F = f (s), depending on the movement s terms of its applications, the system is set in motion from rest; deformation of the spring at the start of movement is zero. When driving on the pulley 3 operates a constant moment M resistance forces (from the friction in the bearings). Determine the value of the required quantity at the time when the movement of s equals s1 = 0,2 m. The desired value is shown in the column "Find" table, where indicated: v1, v2, vC5 - speed cargo 1, 2 and the center of gravity of the body 5 respectively omega3 and omega 4 - angular velocity of the body 3 and 4. All the rollers, including rollers, wrapped yarns (such as roller 5 in Fig. 2), by rolling without sliding planes. In all the figures do not represent the load 2 if m2 = 0; the rest of the body should be represented, and when their weight is zero.

Immediately after payment you will be offered a link to download the task D6 Option 44 (Figure 4 corresponds to the condition 4) on the theoretical mechanics of Reshebnik Targ SM 1989 for part-time students of engineering, construction, transport, instrument-specialties of higher education. The problem is framed in the format word, is added to the archive zip.

I would be very grateful if you work after passing will leave a positive review. It is very important for me.
Thanks in advance.