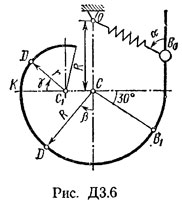 Sold: 0
Uploaded: 19.01.2017
Content: d3-61s.zip 43,22 kB
Loyalty discount! If the total amount of your purchases from the seller TerMaster more than:
If you want to know your discount rate, please provide your email:

Solution of the D3 version 61 of Reshebnik on theoretical mechanics manuals SM Targ 1982.
CONDITION TO THE PROBLEM D3 (p. 58-61 in the training manual Targ SM 1982.):
Thin smooth rod located in the vertical plane, is bent so that the straight portion comprises two circular arcs of radius R = 0,5 m, r = 0,6R, conjugate at point K (Fig. D3.0-D3.9, Table. DZ). Strung on the rod weight P ball attached to a spring with a stiffness coefficient c = k (P / R); the other end of the spring is fixed at O. length of the spring in the state is nedeformirovapnom l0.
The ball starts to move without the initial velocity of the B0 position determined by an angle α (with α = 90 ° ball count just shifted from the equilibrium position toward the point B1); reaching the B1 point, shown in the figure, the ball is released from the spring and then moves only under the influence of gravity.
Considering balloon material point, to determine what speed it will be coming in the point D, the force with which will put pressure on the rod at this point (force pressure P expressed in terms of the weight of the ball). The position of point D, when it is located on an arc of radius R, defined by the angle β, and the arc radius of r-angle γ. Fig. 2 and 3 of an arbitrary point of the arc B1 ED.
Task D3 - the application of the theorem of change of kinetic energy terms.

after payment you will receive a quality solution task D3 Option 61 on the theoretical mechanics of unique Reshebnik SM Targ 1982. Mission accomplished for methodical instructions and control tasks for part-time students of construction, transport, machine-building and instrument-making professions universities edited Targ SM 1982 edition.
The decision is decorated in a format word / pdf / manuscript in jpg or gif format specify if necessary.