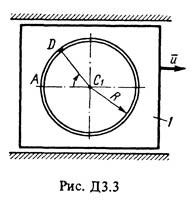 Sold: 0
Uploaded: 13.04.2016
Content: d3-36.zip 28,57 kB
Loyalty discount! If the total amount of your purchases from the seller TerMaster more than:
If you want to know your discount rate, please provide your email:

Right after the payment you will receive a link to a zip-archive with the solution of D3 Option 00 on the theoretical mechanics of manuals SM Targ 1983 for part-time students (Reshebnik Targa 1983).
The decision is made by the methodical instructions and control tasks for part-time students of thermal power, mining, metallurgy, electro-instrument-making, automation and technological specialties universities.
The decision is decorated in WORD format.

Please leave your positive feedback after the test solution. Feedback can be left at any time by clicking on the download link.
Thank you in advance.