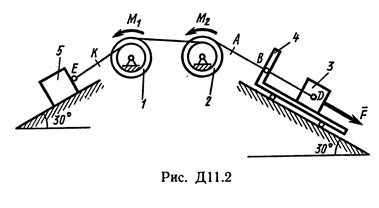 Uploaded: 10.07.2013
Content: d11-26.zip 50,17 kB
Loyalty discount! If the total amount of your purchases from the seller TerMaster more than:
If you want to know your discount rate, please provide your email:

The task of teormeh of Reshebnik SM Targa 1989 D11 Option 26. Conditions to task Dynamics 11 (Full condition on page 95): The mechanical system consists of bodies 1, 2, ..., 5 weight of P1, P2, ..., P5, respectively, related to each other threads, wound stepped on units 1 and 2 (Fig. D11.0 - D11.9, Table. D11). Radii step Units 1 and 2 are respectively R1 = R, r1 = 0,4R, R2 = R, r2 = 0,8R. In the calculation of moments of inertia all the blocks, rollers and wheels considered homogeneous solid cylinder of radius R. In addition to the system of the force of gravity F, applied to the body 3 or 4 (if the body 3 in is not included, the force is applied at the point in the trolley) and a couple of forces with the moments M1, M2, appended to the blocks 1 and 2; when M <0, the direction opposite to the time shown in the figure. On thread portion indicated in the table under "Spring", including a spring with stiffness coefficient s (for example, if the column should AB, AB is the portion of the spring, if AD, the AD - spring, etc.); initially the spring is not deformed. Create a system for the Lagrange equations and find the law of variation of the generalized coordinates x, t. E. X = f (t), assuming that the motion starts from rest; determine the frequency and period of oscillations made by the bodies of the system during its motion (about the choice of coordinates x, see. "Notes"). A dash in the table columns, which are given weight, means that the relevant body is not included in the system (the drawing is not displayed), and zero - that the body is considered weightless but in part; for wheels, numbered 4, P4 - their total weight (a weight of the platform truck is not considered).

Immediately after payment you will receive the solution of D11 Option 26 (Figure 2, condition 6) for teormeh of Reshebnik Targ SM 1989 for part-time students of engineering, construction, transport, instrument-specialties of higher education. The problem is typed in the format word, archived to the archive zip.

Please following successful completion of the work, leave your positive feedback. Believe me, for me it is very important.
Thanks in advance.