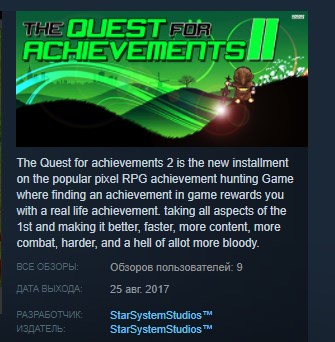 The Quest for achievements 2 is the new installment on the popular pixel RPG achievement hunting Game where finding an achievement in game rewards you with a real life achievement. taking all aspects of the 1st and making it better, faster, more content, more combat, harder, and a hell of allot more bloody.

Its finally happened. The END of all steam achievements. they have been brought out into the real world, but by who?.
You are needed 1 last time to put an end to this once and forall. battle and survive your way through an massive open world filled with enemies, caves, weapons, and secrets with huge areas spanning from dense forest swamps and rich city areas. kill to level up, buy weapons to survive the harsh journey in order to face the person who has caused this. You will not believe who is on the other side. are you ready to save your Steam for 1 last time? are you ready for The quest for achievements 2?