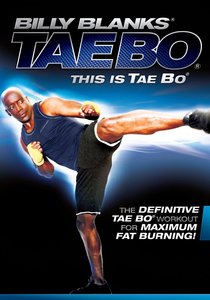 Show a person who has not seen a single movie with Billy Blanks. "Samovolka", "Chinese policeman", "The Last Boy Scout" - and many others, no less interesting than the main character himself. And now Billy Blanks introduces us to his main (besides the movie) brainchild - the Te-Bo system.

What is Tae-Bo? This is a program of independent training with elements of fitness, kickboxing and boxing. There are a number of complexes (similar in some ways to the kata), which are used to all kayak lovers, which are performed in a fairly energetic and powerful pace, with very dynamic movements and kicks and hands. Someone can quite naturally notice the resemblance to the so-called. "Fighting with the shadow" - an exercise well known in boxing. The main difference is the absence of spontaneous movements and a clear rhythmic structure of the complex, which allows both to increase the load and to relieve tension in time.

Tae-Bo, of course, can not be called "single combat" in the full sense of the word. This is fitness. A good, sound fighting spirit, which allows you to prepare the body for the basic training, and sometimes fully replaces it. You will not become a super-fighter if you train on this program - but you will become a real athlete, which will allow you to succeed in your chosen sport.

Related to item "This is Tae-Bo":

This Sparta. Without speculation and slander