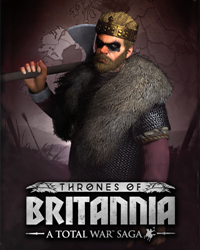 You buy the official pre-order of the game Total War Saga: Thrones of Britannia. After the first purchase, you will receive a discount on all subsequent purchases of our products.

You receive the key Immediately after payment, in the window that opens after the payment is made, as well as a link to the page with the key will come to your email address indicated at purchase.

878 year from the birth of Christ. Gathering the army, King Alfred the Great offered the Vikings heroic resistance at the Battle of Eddington and stopped their invasion. The reconciled, but not broken Danes settled on the lands of Britain. For the first time in almost 80 years, a fragile peace has been established on the islands.

However, the kings of England, Scotland, Ireland and Wales already feel that the time for change and decisive action is approaching. New unions. New wars. Legends will be made up about this time, because right now one of the greatest nations in history is being born.

Many will try on the crown - only one will rule.

Thrones of Britannia is an independent game from the Total War series, which offers you to rewrite the key period in history that determined the future of Britain. Strengthen and defend the kingdom by standing at the head of one of ten factions - the Anglo-Saxons, Gaelic clans, Welsh tribes or Vikings. Make alliances, manage growing settlements, collect armies and take part in campaigns on the most detailed map in the history of the Total War series.

There are many ways to achieve victory in a big campaign. Aggressively expand your possessions at the expense of the army; Achieve fame through construction, advanced technology and influence, or complete a series of unique assignments based on the history of the chosen faction. Having strengthened your position, get ready for serious tests at the late stage of the game and try to fulfill the final condition leading to an absolute victory.

The game makes a number of updates to the key mechanics of Total War. Improved aspects include provincial governance, politics, technology, recruitment, dilemmas, and more. Thanks to these changes, the gameplay has become even deeper and more interesting.

1. You need to download and install Steam http://steampowered.com/download/SteamInstall.msi (if not already installed)
2. Register a new account on Steam or go to an existing one.
3. Go to the "My Games" section and select "Activate via Steam" and enter the key received immediately after payment.
4. After activation, the game will appear in the list of games and you can download it from steam.