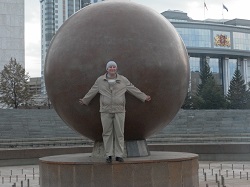 RynDEzA information about the seller and his items
offlineAsk a question

The crisis of socialism and the collapse of the Soviet Union was the final tumultuous events of the XX century. From the horrors of the "black apocalypse" of 1991-1994 Russia saved the democratic and radical market reform. After going through rebirth Russia has become a very different state. In place of the militant atheism of the materialistic widely blossomed various religions. From various religions average level of development - the "heathen" to "traditional" religions of the high - Orthodox Christianity and Islam. However, the values that created by mankind, beginning with the XV-XVI centuries, with great geographical discoveries and the Christian Protestant reformers began unfairly anathematized. Especially when it became intolerable denial of atheistic teachings and achievements of modern civilization, achieved thanks to atheism.
Scientific research leads to some interesting conclusions about the new turn of modern atheism, and atheism is recognizing the realities of the esoteric. The book has a significant element of scientific novelty, described a very popular language. It is designed for the general reader. Public figures, scholars, social scientists and ordinary people looking for a moral support in life will find in these pages a lot of useful information.