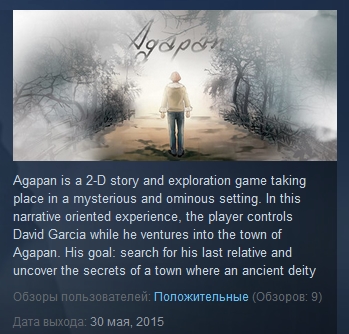 After the abrupt death of David Garcia´s mother a decade ago, the young boy had nothing left: no relatives and no friends. Luckily, he was quickly adopted by a rich couple and lived a life full of luxuries and peace.

However, for 11 years, the only thing in David´s mind was his defunct mother and their lonely past together. One morning, during his monthly visit to the graveyard where his mom rests, David meets an unknown woman who tells him what he was waiting to hear for many years:

Fueled by the desire to know more about his family´s past, David trusts the woman´s words and travels to the town where his grandmother resides, Agapan. During four days, David ventures into the deep fog of the village with one clear goal in mind: finding his grandmother. However, the ominous fog of Agapan hides many secrets waiting to be discovered.

★ A solid 2-D narrative oriented experience taking place in Agapan, a mysterious village forgotten by time.
★ Meet and interact with compelling characters and discover the power of an ancient deity... Huitzi.
★ Create your own path throughout the narrative with many decisions to make and more than a dozen ending variations to experience.
★ Immerse yourself in the narrative with illustrated dialogues, full-screen illustrations, and a complete original soundtrack.