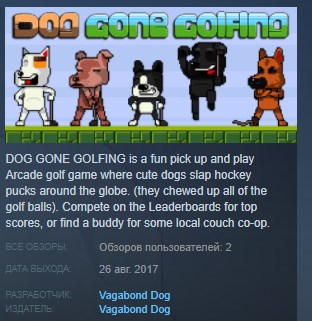 http://store.steampowered.com/app/665590/DOG_GONE_GOLFING/
💎💎💎💎💎💎💎💎
The origins of Dog Golf are unclear and much debated. However, it is generally accepted that modern Dog Golf was developed in Scotland during the Middle Ages. The game did not find international popularity until the late 19th century, when it spread into the rest of the United Kingdom and then to the United States and Canada. Hushed whispers echo in the Dog park the name of the legendary Dog Golfer, Lady Bird, and her epic battles with the hard nosed Pit-bull Tyson. Every century, the gods call upon the Canines to engage in the ritual of Dog Golf. Who will become the new legend?

EVERY SHOT MATTERS
Choose your power, pick your shot type, and plan your approach as you slap and bounce your puck towards each hole. Play your angles just right and you could become the legendary Canine Puck Master.
MODES OF PLAY

WORLD TOUR - Master the art of Dog Golfing as you compete through a series of 20 unique worlds. Each world adds new challenges and features to test your skill. Compete against friends on the Global Leaderboards for dog park supremacy and earn coins to unlock new puck skins.
SHOT STREAKER - See how long you can keep your streak going in this challenge mode where you have a limited amount of shots per hole. Each time you play new holes will be generated, so no two rounds are ever the same. Only true masters will climb the ladder and become a Dog Golf hero.
ENDLESS JOURNEY - No hole is ever the same but all players complete holes in the same order! Play forever as you explore the infinite universe of Dog Golfing. This mode literally never ends, even the developer doesn´t know what lies ahead. Will there be dog treats? Who knows?
DOG GOLF ARENA - It´s Dog vs. Dog in this local 2 player battle for the title of ultimate Dog Golfer. Can´t find a friend? No problem! Take on one of 5 highly skilled Robotic K-9 neural network learning machines.
PRACTICE GREEN - Hone your craft and learn to play Dog Golf on an unlimited number of randomized holes. Learn the unique skills of each Dog Golfer, and become a true champion in the Dog Golf community.